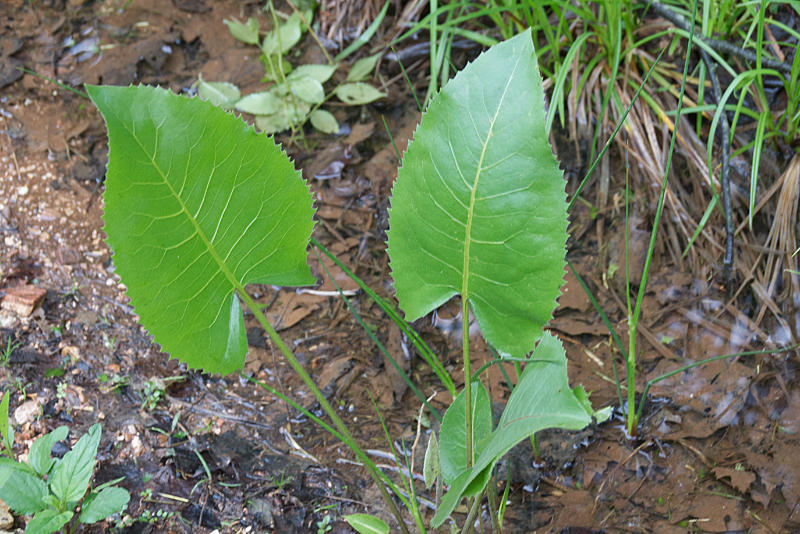 Prairie dock (Silphium terebinthinaceum) is in the Asteraceae family, along with daisies and sunflowers. In fact, when they bloom in late summer they produce large yellow flowers on a tall (up to 8 feet) stem with few leaves. There are at least 6 distinct varieties to be found in the Ozarks.

Where Do You Find Prairie Dock?

Although you would assume prairie docks would be found in prairies (and you would be correct), they can also be found along roadsides, in ditches, and in other well-drained soils. It prefers rocky areas with plenty of sun. The prairie dock is one of 6 species of Silphium, commonly known as rosinweed, that can be found in the Ozarks. Collectively these plants have the common name rosinweed. This is due to the rosin that exudes from the plant when it is injured. The rosin has a smell similar to turpentine. The rosin was used by Native Americans and pioneers as a type of chewing gum to help clean the teeth and mouth, and freshen the breath.

When Does Prairie Dock Bloom?

Prairie dock blooms July through August by putting up a tall stalk with one or more showy yellow flowers on an almost leafless stalk. The blooms look like small sunflowers, but they do not produce large seeds like sunflowers. The flowers are an important food source for all manner of wildlife, from bees and butterflies to birds and mammals.

One cousin of this plant, the compass plant, is so-called because the leaves orient themselves so the edges are pointing north and south, with the broadsides of the leaves facing east and west to maximize sun exposure for photosynthesis. This also allows them to minimize water loss because they aren’t exposed directly to the hot noon sun during the summer.

The leaves of prairie dock tend to do this also. Most of the leaves will be found to be oriented with the edges pointing north and south. This can be a good thing to know if you happen to get lost and run across these plants. The leaves are mostly oriented this way even when the sun isn’t shining.

The roots can be up to 14 feet or longer. It can put down roots that reach the water table so it can withstand droughts that would kill other plants. This makes it very hard to eradicate or move once established. I have read that the leaves will feel cool even on a hot summer day because they transport water from deep underground where the water temperature is cool.

Although the plant is considered potentially toxic, it has traditionally been used to brew a tea to fight fever, and the smoke was used to treat coughs, asthma, and other lung conditions. It also has mild diuretic properties.

If you would like more information on a variety of wild medicinal and edible plants be sure and check out our articles on our Natural Living & Health blog. You can also read more about prairie dock here.