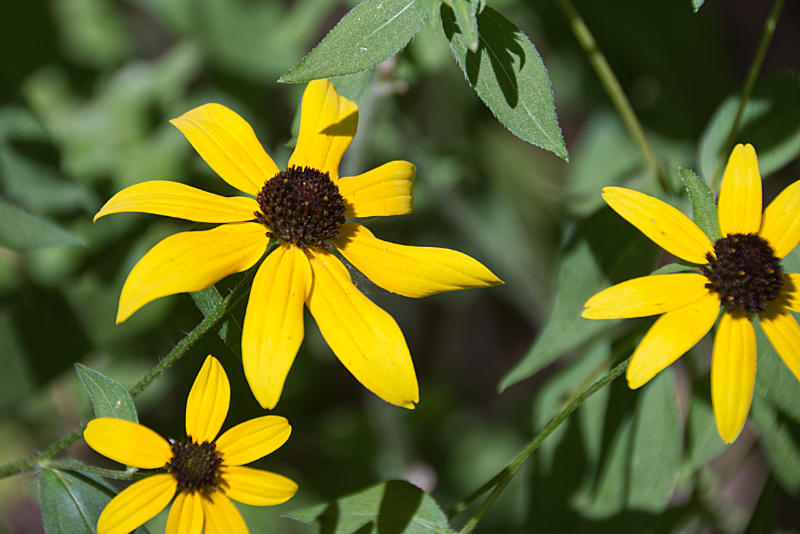 The Brown-Eyed Susan (Rudbeckia triloba) is a flowering perennial plant native to North America. It is a member of the aster family, which also includes sunflowers and is one of the largest plant families. It is known for its bright yellow or orange petals and dark brown central disks. The flowers typically bloom in late summer and continue to bloom into fall. The plant can grow up to 4 feet tall and has a bushy, upright appearance. The leaves are lance-shaped and are arranged alternately on the stem. The plant is a popular choice for gardens and wildflower meadows. It is easy to grow, drought-tolerant, and attractive to pollinators. In addition to its ornamental value, the plant also has a number of edible and medicinal uses. The petals, leaves, and seeds can be eaten, and the plant has been used traditionally for various ailments, including fever and sore throat. Modern research has shown that the plant may have anti-inflammatory properties and may be helpful in treating certain skin conditions.

The Brown-Eyed Susan is native to the central and eastern United States. It is commonly found in the Great Plains region, from Texas to South Dakota, and from Kentucky to Minnesota. It is also found in the Appalachian Mountains and the Ozark Mountains, as well as in the Northeastern and Midwestern states. It is less common in the West.

In terms of habitat, the Brown-Eyed Susan is a versatile plant that can be found in a wide variety of different environments. It is commonly found in meadows, prairies, and along roadsides, as well as in open woods, fields, and gardens. It can be found in a variety of soil types, including sandy and clay soils, but it prefers well-drained soil and full sun. However, it can tolerate partial shade. The plant is also drought-tolerant and can be found in dry, rocky areas, and adapts well to a wide range of pH. This species typically blooms in late summer to early fall, and it can reach up to 4 feet tall.

It is important to note that the common name “Brown-Eyed Susan” is also used for other plants, such as Rudbeckia hirta, and it is important to distinguish the species by their scientific name to understand their specific range and habitat.

The flowers of Black-eyed Susan are typically 2-3 inches in diameter, with a central brown or black disk that is surrounded by yellow or golden-brown petals. The petals are slightly ruffled and have a slightly reflexed shape, giving the flower a “daisy-like” appearance. The flowers are typically arranged in clusters at the top of the stem.

The leaves of the Brown-Eyed Susan are lance-shaped and are arranged alternately on the stem. They are typically 2-5 inches long and 0.5-1.5 inches wide. The leaves are a bright green color and have a slightly hairy texture. They are also slightly toothed or scalloped along the edges. The leaves are attached to the stem by short petioles. The stem of the plant can grow up to 4 feet tall and have a hairy or downy texture and can be green or reddish in color.

It is important to note that the size and shape of the flowers and leaves may vary depending on the growing conditions and the specific cultivar. Some cultivated varieties may have larger or smaller flowers and leaves, or they may have slightly different colors or patterns.

Brown-eyed Susan typically blooms in late summer and continues to bloom into the fall, with peak blooming typically occurring in August and September. The blooming period can last anywhere from 6 to 8 weeks.

The blooming period of the Brown-Eyed Susan is not only limited to one specific time of the year. Some cultivars can produce blooms over an extended period from summer to fall. The plant also has the ability to self-sow, which means that it can produce new flowers even after the initial blooming period is over.

The Brown-Eyed Susan has a long history of use as a food source. The leaves, petals, and seeds of the plant are all edible and have been used in various traditional dishes and medicinal remedies.

The leaves can be eaten raw or cooked, and they have a slightly bitter taste. They can be used in salads, soups, or cooked as a green. They are also high in vitamins and minerals, including vitamin C and iron. It is important to note that the leaves should be harvested before the plant flowers, as they can become more bitter once the plant begins to bloom.

The petals of the flower can also be eaten and have a slightly sweet and tangy taste. They can be used as a garnish, in salads, or as a colorful addition to sandwiches. They are also high in antioxidants.

The seeds of the plant are also edible and are a good source of protein and essential oils. They can be ground into flour or meal and used in baking or as a thickener for soups and stews.

It should be noted that while all parts of the plant are edible, they should be consumed in moderation. Some people may be sensitive to the compounds in the plant. It is also important to make sure that the plant is not treated with any pesticides or herbicides before consumption. Another caution is to avoid gathering them from roadsides if you plan to consume any part of the plant. They may have absorbed toxins from the exhausts of automobiles that have entered the soil.

The Brown-Eyed Susan has a long history of use in traditional medicine. The plant has been used to treat various ailments, including respiratory problems, fever, and sore throat.

The plant is known to have anti-inflammatory properties, which makes it useful in treating respiratory issues such as bronchitis, asthma, and chest congestion. The plant is also high in antioxidants, which may help to protect the body against free radicals and inflammation.

The plant has been traditionally used to reduce fever and treat sore throat. The leaves and flowers contain compounds that are thought to have a soothing effect on the throat, making them useful in treating sore throat and other respiratory issues.

The plant is also used to treat skin conditions such as eczema and psoriasis, as it has anti-inflammatory properties that can help to reduce redness and itching.

There is limited modern research to support its traditional uses and to understand its potential health benefits. Although some studies have been conducted to investigate the medicinal properties of the plant.

Another study published in the Journal of Natural Products in 2013, found that the plant contains flavonoids which have antioxidant properties and may be useful in protecting the body against free radicals and inflammation.

A study published in the Journal of Ethnopharmacology in 2015, investigated the potential use of the plant in treating skin conditions such as eczema and psoriasis. The study found that the plant has anti-inflammatory properties and may be useful in reducing redness and itching associated with these conditions.

It is important to note that while these studies suggest potential health benefits, more research is needed to fully understand the medicinal properties of the plant and to confirm its traditional uses. It’s also important to note that the plant should not be consumed in large amounts as it can cause gastric discomfort, and it is not recommended for pregnant women or people with liver or kidney disease. It is always advisable to consult with a healthcare professional before using any plant for medicinal purposes.

Cultivation and Care of Brown-eyed Susan

The Brown-Eyed Susan is hardy and adaptable and can grow in a variety of soil types and light conditions.

It prefers well-drained soils that are rich in organic matter. It can tolerate a wide range of soil pH levels, from acidic to neutral to slightly alkaline. It can also tolerate soils that are sandy or contain clay. The plant can grow in both dry and wet soils as long as it has good drainage.

In terms of light, the Brown-Eyed Susan prefers full sun, but it can tolerate partial shade. The plant will produce the most flowers and have the most robust growth when grown in full sun. It will still produce some flowers in shaded areas, but the overall growth will be less vigorous and the number of flowers will be lower.

The plant is drought-tolerant, which means that it can survive in dry conditions but it will perform better when provided with adequate moisture. It should be watered during prolonged dry spells or droughts to ensure optimal growth and flowering.

The specific soil and light requirements may vary depending on the cultivar and location. It’s always advisable to check with a local nursery or consult with a local expert to ensure that the plant you choose will thrive in your specific growing conditions.

There are several different methods that can be used to propagate Brown-Eyed Susan. These include:

It’s important to note that the success rate of these methods may vary depending on the specific growing conditions and the cultivar.

The Brown-Eyed Susan is generally a hardy and disease-resistant plant, but it can be susceptible to a few pests and diseases. Here are some common issues and ways to manage them if you want to grow them in your garden:

In conclusion, the Brown-Eyed Susan is a hardy and adaptable perennial wildflower that is native to the central and eastern United States. It is known for its showy yellow or golden-brown flowers, which bloom in late summer to early fall. The plant is versatile and can be found in a variety of different environments, including meadows, prairies, and along roadsides. It can tolerate a wide range of soil types and light conditions and is drought-tolerant. It has a long history of use in traditional medicine, and modern research suggests it may have anti-inflammatory and antioxidant properties. However, more research is needed to fully understand its medicinal properties. It is also important to note that the plant should not be consumed in large amounts as it can cause gastric discomfort, and it is not recommended for pregnant women or people with liver or kidney issues. The plant can be propagated by seed sowing, division, and root or stem cutting, and it’s important to understand pest and disease management to keep the plant healthy and beautiful. The Brown-Eyed Susan is a versatile and beautiful wildflower that is a great addition to any garden or wildflower meadow.

For further info on the Brown-eyed Susan, you can read more about it here. You can read about other edible and medicinal plants on our Natural Living and Health blog.