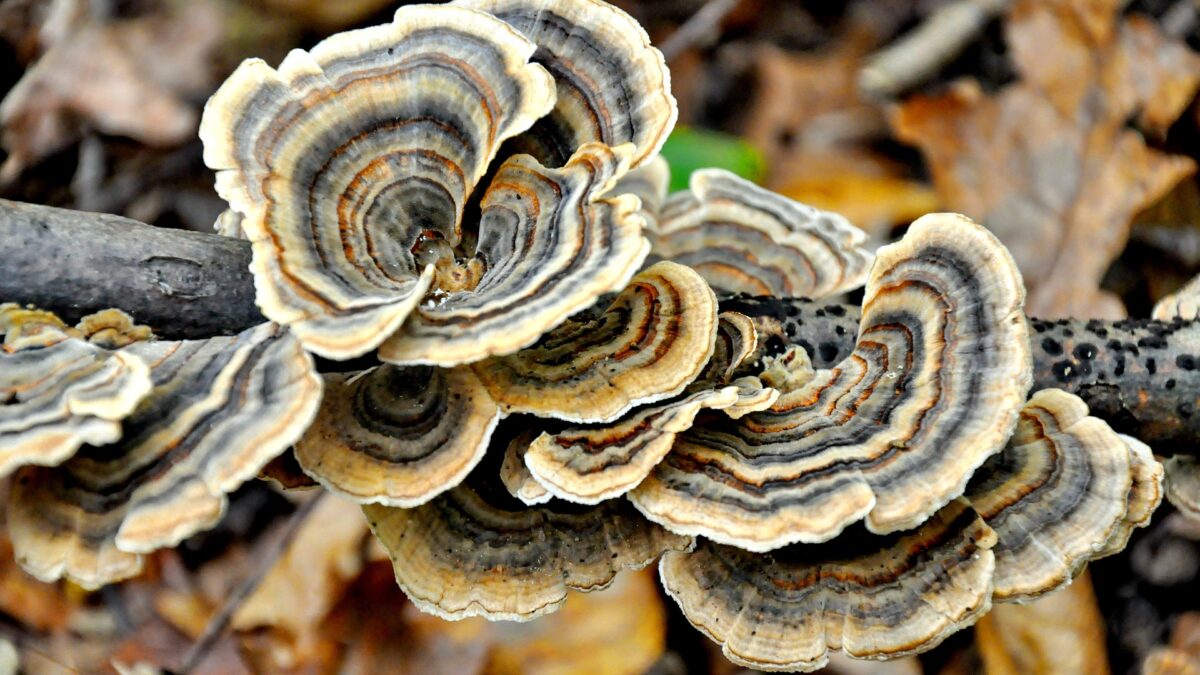 What are Turkey Tail Mushrooms?

Turkey Tail mushrooms, also known as Trametes Versicolor, are a species of polypore mushroom that are easily identifiable by their colorful ‘turkey tail’ shapes. Turkey Tail mushrooms have a wide variety of colors, ranging from bright reds, oranges, and yellows, to blues and purples. The colors of Turkey Tail mushrooms are usually arranged in concentric rings, giving the mushroom a fan-like or ‘turkey tail’ appearance. The mushroom’s cap measures between 1 to 7 inches in diameter and is usually between 1/8 to 1/4 of an inch thick. The underside of the mushroom has white or yellow pores. They are found on dead or dying wood and may be found growing singly, but more commonly in dense clusters, called brackets.

Where to Find and Forage Turkey Tail Mushrooms

Turkey tail mushrooms can be found growing on dead or decaying logs and stumps, as well as on dead and dying hardwood trees. In the United States, they are most commonly found in the Pacific Northwest and the Midwest. Be sure to look in areas with plenty of shade and moisture, such as wooded areas with plenty of dead or decaying wood. I have found the best time to find them is a few days after moderate to heavy rains in the Spring or Fall. However, in our area of the Ozarks, they can also be found in the Summer months, especially after substantial rainfall.

1. Look for turkey tail mushrooms in deciduous woodlands. Turkey tail mushrooms usually grow on dead hardwood, such as oak, maple, and beech, although they can also be found on conifers. They are typically found in moist, shady environments, such as in wooded areas or near streams.

2. Look for turkey tail mushrooms growing on dead logs or standing dead trees. They can sometimes be found on living trees if the trees are damaged or dying.

3. Look for turkey tails in the spring and fall months when the mushrooms are in their prime. Moderate temperatures and increased rainfall in these seasons tend to trigger fruiting in these mushrooms.

6. Check for wormholes in the mushroom before harvesting, as worms may have already eaten through the mushroom.

7. Look for mushrooms with a thin, leathery texture and a fan or shelf-like shape.

8. Avoid harvesting mushrooms from areas that may have been sprayed with chemicals or treated with pesticides.

9. Store harvested mushrooms in a paper bag in a cool, dry place.

10. Always cook mushrooms before eating them.

Turkey tail mushrooms have been used in traditional Chinese medicine for centuries due to their medicinal properties. Studies have shown that they contain polysaccharide-K, which has been found to have anti-cancer, anti-viral, and anti-bacterial effects, as well as antioxidant and anti-inflammatory effects. They have also been shown to boost the immune system, increase energy levels, and improve the health of the digestive tract. Studies also suggest that turkey tail mushrooms can help to reduce cholesterol and blood sugar levels, as well as reduce the risk of cardiovascular disease. As more research is conducted on these medicinal mushrooms, they are becoming increasingly popular in the medical community as a natural remedy for various diseases and conditions.

Turkey tail mushrooms contain a variety of compounds that are responsible for their health benefits, including polysaccharides, triterpenes, sterols, and phenols. The most studied compounds are beta-glucans, which are polysaccharides, and triterpenoids, which are a type of triterpene. Beta-glucans have been studied for their anti-inflammatory and anti-cancer effects, while triterpenoids have been shown to have antioxidant, immunomodulatory, and anti-cancerous properties. Additionally, turkey tail mushrooms contain several phenolic compounds, such as quercetin and fumaric acid, which have been found to have anti-inflammatory and anti-cancer properties.

Turkey tail mushrooms are rich in vitamins, minerals, and beneficial compounds. They contain high levels of B vitamins, including B1 (thiamine), B2 (riboflavin), B3 (niacin), B5 (pantothenic acid), B6 (pyridoxine), and B12 (cobalamin). They are also a good source of minerals such as potassium, phosphorus, zinc, selenium, copper, and manganese. Additionally, turkey tail mushrooms are an excellent source of dietary fiber, containing both soluble and insoluble fibers.

Turkey tail mushrooms have been used in traditional Chinese medicine for centuries. They are believed to have the following effects:

Studies have found that turkey tail mushrooms may be able to tonify the immune system. By tonifying, it is meant that the mushroom helps to strengthen and support the natural functioning of the immune system. The primary active components responsible for tonifying the immune system are polysaccharide-K (PSK) and polysaccharide-peptide (PSP). These compounds are believed to stimulate the production of immunoglobulins, which are proteins that help fight off invading pathogens. Additionally, studies suggest that turkey tail mushrooms may help to reduce inflammation and neutralize free radicals, making them effective at boosting overall immunity.

Evidence suggests that these mushrooms may contain certain compounds that have anti-tumor and immune-modulating effects on the body. In particular, polysaccharides, beta-glucans, and proteoglycans found in these mushrooms have been found to have an anti-cancer effect, as they stimulate the immune system and inhibit tumor growth. They can increase the body’s production of natural killer cells, which help to recognize and destroy abnormal cells and prevent the spread of cancer. They are a source of dietary antioxidants, which protect cells from the damage caused by free radicals and may decrease the risk of cancer. They may also have anti-inflammatory effects, which can help reduce the risk of cancer.

Turkey tails are believed to have antiviral and antibacterial properties due to their high content of polysaccharide-K (PSK). PSK is a complex carbohydrate that has been studied extensively for its potential to help boost the immune system. PSK has been shown to have antiviral and anti-inflammatory properties and has been used to treat a variety of conditions including cancer, chronic fatigue syndrome, and HIV/AIDS. Additionally, they contain a number of other beneficial compounds such as beta-glucans, triterpenes, and phenolic compounds. These compounds have been studied for their potential to help fight off viruses, bacteria, and parasites.

Turkey tail mushrooms are believed to have immunomodulatory, antioxidant, and anti-inflammatory properties, which can help to relieve digestive issues. Studies suggest that they may help to reduce the symptoms of inflammatory bowel disease and improve overall gut health. They may also help to reduce bloating and gas and improve the absorption of nutrients in the gastrointestinal tract. Additionally, turkey tail mushrooms are believed to help to balance the gut microbiome, which is important for overall digestive health. Research is still ongoing, but it is thought that the polysaccharides and triterpenes they contain may be responsible for these beneficial effects.

Turkey tail mushrooms have long been used in traditional Chinese and Japanese medicine as a remedy for fatigue. They are believed to help boost energy levels and improve overall health. They are extremely high in antioxidants, which help to protect cells from damage and prevent inflammation. Antioxidants can help reduce fatigue by counteracting the body’s production of free radicals, which can lead to fatigue. They are rich in beta-glucans, which are a type of complex carbohydrate that can help improve the body’s immune system and help it fight off pathogens and illness. This can help reduce fatigue caused by a weakened immune system. They are also believed to help improve digestion and metabolism, which can also help reduce fatigue. By improving the body’s ability to process and absorb food, it can provide more energy and help with fatigue. Additionally, they are a good source of B vitamins, which play an important role in energy production. Finally, they have been used to help reduce stress and improve mental clarity. By reducing stress and improving mental clarity, fatigue can be reduced.

PSP (polysaccharide-K) contained in these mushrooms has been shown to improve insulin resistance, lower blood sugar levels, and reduce the risk of diabetes. Studies have shown that PSP has the potential to improve glycemic control and reduce fasting glucose levels. They contain a range of other bioactive compounds that have antioxidant, anti-inflammatory, and anti-cancer properties. These compounds may help to protect against oxidative stress, reduce inflammation, and improve metabolic control.

How to Use Turkey Tail Mushrooms

To prepare turkey tail mushrooms for medicinal use, start by ensuring the mushrooms are fresh. Gently scrub off any dirt or debris, then slice the mushrooms into thin pieces. You can then dry the pieces by either air-drying or oven-drying them. Once the mushrooms are dried, they can be taken in pill form, or you can use them to make a tea. To make a tea, add 1 teaspoon of dried mushrooms to 8 ounces of boiling water. Simmer for 10 minutes, then strain the liquid and discard the mushrooms. Drink up to 3 cups daily. For a tincture, mix 1 part dried mushrooms with 5 parts alcohol, such as vodka. Allow the mixture to steep for 4 to 6 weeks, then strain. Take up to 1 teaspoon of the tincture up to twice daily. Finally, you can also make a powder from the dried mushrooms. Use the powder to make capsules and take up to 1 gram twice daily.

Use as a Dietary Supplement

Turkey tail mushrooms, are a source of fiber and protein and contain compounds that have been shown to have antioxidant, anti-inflammatory, and immune-boosting properties. When using turkey tail mushrooms as a dietary supplement, it is important to note that the mushroom should be cooked before consumption. This is due to the fact that the mushroom contains compounds that can be toxic if consumed raw. It is also important to note that some people may experience an allergic reaction to the mushroom and should consult a doctor before trying it. To prepare turkey tail mushrooms, the mushrooms should be thoroughly washed and then boiled for at least 10 minutes. After boiling, the mushrooms can be enjoyed in a variety of ways, including in salads, soups, stir-fries, and more. For those who prefer to take the mushrooms in a supplement form, they can be purchased in a variety of forms, including capsules, powders, and tinctures.

They are edible and have been used for centuries in traditional Chinese medicine for their medicinal properties. In the culinary world, turkey tail mushrooms have a mild flavor and a crunchy texture, making them a popular addition to soups, stews, and stir-fries. They can also be cooked as a side dish or added to salads for a crunchy texture. I find that they are still too leathery for my taste even when cooked. It may be preferable to take them in other forms if you are a picky eater.

Recent studies have shown that they have many potential health benefits, including boosting the immune system, fighting cancer, and helping with digestive problems. Turkey tail mushrooms contain polysaccharides, which are believed to stimulate the body’s natural defense system and increase the production of white blood cells. They may also have anti-inflammatory, anti-viral, and anti-tumor properties. In addition, these mushrooms are high in antioxidants, which can help protect against damage from free radicals. Finally, turkey tail mushrooms are a good source of dietary fiber which can help improve digestion and reduce cholesterol levels.

You may want to visit our Natural Living & Health blog to read other articles about wild medicinal plants.