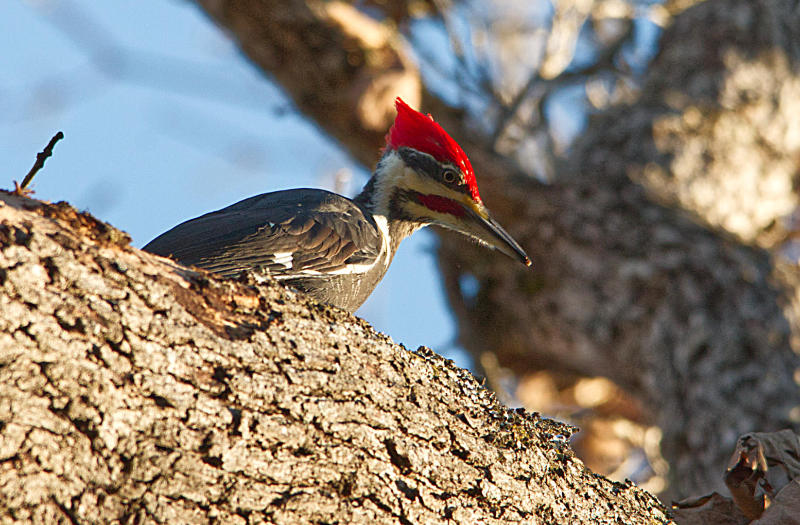 Adults of the species are up to 19 inches long with a wingspan of up to 30 inches. The pileated woodpecker is mostly black, with a striking red crest, white lines down the throat, and white underneath the wings. The male pileated woodpecker has a red line from the back of the bill to the throat. In females, the line is black. The red crest sweeps back to a point in older birds while appearing more rounded in juveniles.

The pileated woodpecker lives and breeds in large forested tracts. They nest in a large hollow chiseled out by the breeding pair in a large tree. They prefer old dead and dying trees but will use a live tree if that is the only thing available. They have even been known to nest in utility poles when unable to find a suitable tree. They rarely reuse the same nesting site from year-to-year. These unused nests can then become nesting sites for other forest birds. Wood ducks may use these abandoned nest sites since they cannot bore holes in trees for nesting.

They have a large home range of sometimes up to 900 acres to find enough food to survive and raise their hatchlings. They mainly eat insects like carpenter ants and boring beetles. Carpenter ants may make up as much as 60% of their diet. They will also eat nuts and berries when they are available.

They forage for food by boring into trees and stumps to find ant nests and beetles. They leave unmistakable rectangular holes as they excavate dead wood in search of these tasty insects.

The calls and drumming sounds of pileated woodpeckers are unmistakable when you learn what they sound like. The “All About Birds” website from Cornell University has a great page with recordings of the calls and drumming sounds these birds make. Once you become familiar with the sounds they make it becomes much easier to know when they are in the area of the forest you might be visiting.

Both parents participate in the rearing of chicks. Nesting pairs bond for life, but will choose another partner if one of the pair dies. The nest the construct is lined with wood chips and shaving resulting from the boring of the nesting cavity. Both parents also feed the young by regurgitating the insects they find in the forest. The pair will also defend their territory against interlopers when nesting. They may tolerate others of the species during the winter.

Chicks leave the nest in about 28 days and may stay with their parents for 2-3 months before leaving to find their own territory.

For me, getting the photos that accompany this article was a joy. After months of trying to find and photograph these striking birds, I was finally able to get some photos using a ground blind. They are fairly skittish birds and they have great eyesight. In my experience, they do not tolerate being disturbed by people and they will vacate the area if they see you.

The pileated woodpecker is the largest woodpecker in North America, and they are a joy to watch when you find them. They are easy to identify due to their large red crest on the head. The male has a red stripe from the bill to the throat, this stripe is black on the female.

I even had a rare treat to photograph one on the ground feeding on a stump. I have heard this is a rare sighting so I am especially pleased to be able to show you the photo below.

To read more about plants and wildlife in the Ozarks please visit our Natural Living and Health Blog.

Nov 17, 2022 Gary Davis
error: All images are copyrighted 2019-2022 Lost In The Ozarks or Gary Davis Photography. All Rights Reserved.
This site contains affiliate links. We receive a small commission when you make a purchase .
Close Notice
This is default text for notification bar
Learn more